Bosch competencies in a class of their own

Budapest – A new teaching unit, the Bosch Lean Management Corporate Department, has been set up at the Budapest Business School (BBS). The deed of foundation was signed on 27 February 2017 by Prof. Dr. Balázs Heidrich, rector of the Budapest Business School and Daniel Korioth, representative of the Bosch Group in Hungary. “The aim of the Bosch Lean Management Corporate Department is to strengthen logistics training at the university with teaching in lean management, which will give students marketable skills they cannot get elsewhere.” – Daniel Korioth said at the ceremony. He added, “I am proud that the university has seen fit to share the practical skills and proven operational processes that Bosch has accumulated.” Prof. Dr. Balázs Heidrich, rector of the BBS, said, “The Budapest Business School – Hungary’s largest university of applied social sciences – attaches great importance to maintaining close contacts with players on the labour market, because our teaching must square up to labour market demands if we are to provide our students with marketable qualifications. The establishment of the Bosch Lean Management Corporate Department represents a guarantee that our students will learn unique, up-to-date skills that will give them a major advantage on the labour market.” 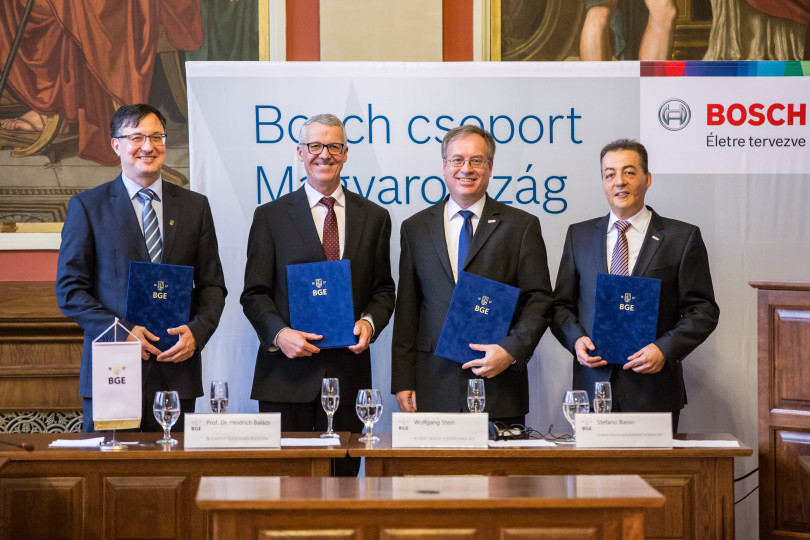 A new teaching unit, the Bosch Lean Management Corporate Department, has been set up at the Budapest Business School (BBS).

Bosch managers and experts in the lecture hall

“The establishment of the Robert Bosch Lean Management Corporate Department implements cooperation between BBS and the Bosch Group at several interconnected levels. Firstly, Bosch staff will be involved in an overhaul of the subject matter and the expansion of required and recommended reading, and in teaching the subject. Secondly, through regular factory visits, case studies and consultation for degree dissertations and student study-group projects, Bosch will help students put what they learn into practice,” said Prof. Dr. Heidrich. Logistics managers and experts from the Bosch plants in Hatvan and Maklár and from the company’s Budapest operations will be involved in the educational work of the newly-founded department. They will be delivering lectures on Bosch’s logistics processes and areas such as performance management and connected industry (Industry 4.0). In placements at the Hatvan and Maklár plants, the students will get a close look at these logistics processes. Bosch also offered 20 laptops which students will use for simulations and learning logistics IT. Daniel Korioth said, “This collaboration with the university and the launch of a new department make very clear that Bosch is taking its wide range of competencies into a new area. I consider it essential for university teaching to be complemented by practical learning, because that way, students acquire skills they can put to use immediately.” The ceremony for the signing of the deed of foundation was attended by Wolfgang Stein, commercial plant manager of Robert Bosch Elektronika Kft. of Hatvan, Stefan Basso, general manager commercial of the Eger- and Maklár-based Robert Bosch Automotive Steering Kft. and Volker Schilling, who in January went to Germany to take charge of the worldwide auditing organization of the Bosch Group. Volker Schilling launched this project while he was commercial plant manager of the Bosch plant in Hatvan. At the event, the Rector handed him his letter of appointment as head of the new department. He will fulfil his university duties alongside his work in Germany.

Lean is a corporate organisation and management system aimed at enabling companies to deliver products and services as economically as possible. A lean company bases its activities above all on what represents value to its customers. The lean method has found most application in manufacturing industry, particularly the automotive industry.

Bosch has been present in Hungary since 1898. After its re-establishment as a regional trading company in 1991, Bosch has grown into one of Hungary’s largest foreign industrial employers. In fiscal 2015, its ten Hungarian subsidiaries had a total turnover of HUF 959 billion and sales of the Bosch Group on the Hungarian market – not counting trade among its own companies – was HUF 246 billion. The Bosch Group in Hungary employs some 12,200 people (as per January 1, 2016). In addition to its manufacturing, commercial and development business, Bosch has a network of sales and service operations that covers the entire country.

The Bosch Group is a leading global supplier of technology and services. It employs roughly 390,000 associates worldwide (as of December 31, 2016). According to preliminary figures, the company generated sales of 73.1 billion euros in 2016. Its operations are divided into four business sectors: Mobility Solutions, Industrial Technology, Consumer Goods, and Energy and Building Technology. The Bosch Group comprises Robert Bosch GmbH and its roughly 450 subsidiaries and regional companies in some 60 countries. Including sales and service partners, Bosch’s global manufacturing and sales network covers nearly every country in the world. The basis for the company’s future growth is its innovative strength. At 120 locations across the globe, Bosch employs 59,000 associates in research and development. The Bosch Group’s strategic objective is to deliver innovations for a connected life. Bosch improves quality of life worldwide with products and services that are innovative and spark enthusiasm. In short, Bosch creates technology that is “Invented for life.”

Budapest Business School is the market leading University of Applied Sciences in Hungary educating 16.000 students. The history of its legal predecessors reaches back to 1857, the year of the foundation of the Academy of Commerce.

Budapest Business School received the title „University of Applied Sciences” in 2013 and officially gained university status on the 1st of January, 2016.

The graduates of the legal predecessor institutions are the most acknowledged and most sought-after professionals on the Hungarian job market. Many of BBS’s alumni are prominent figures of the Hungarian society and economy.

In May of 2010, BBS was awarded the Higher Education Quality Award for its exceptional achievements in quality improvement and it was given the ISO 9001:2009 certificate in March of 2012. The Institution became a member of the most significant higher education organization, the European University Association (EUA) in June of 2011, and joined the higher education organization of UNESCO, the International Association of Universities (IAU) in 2012.