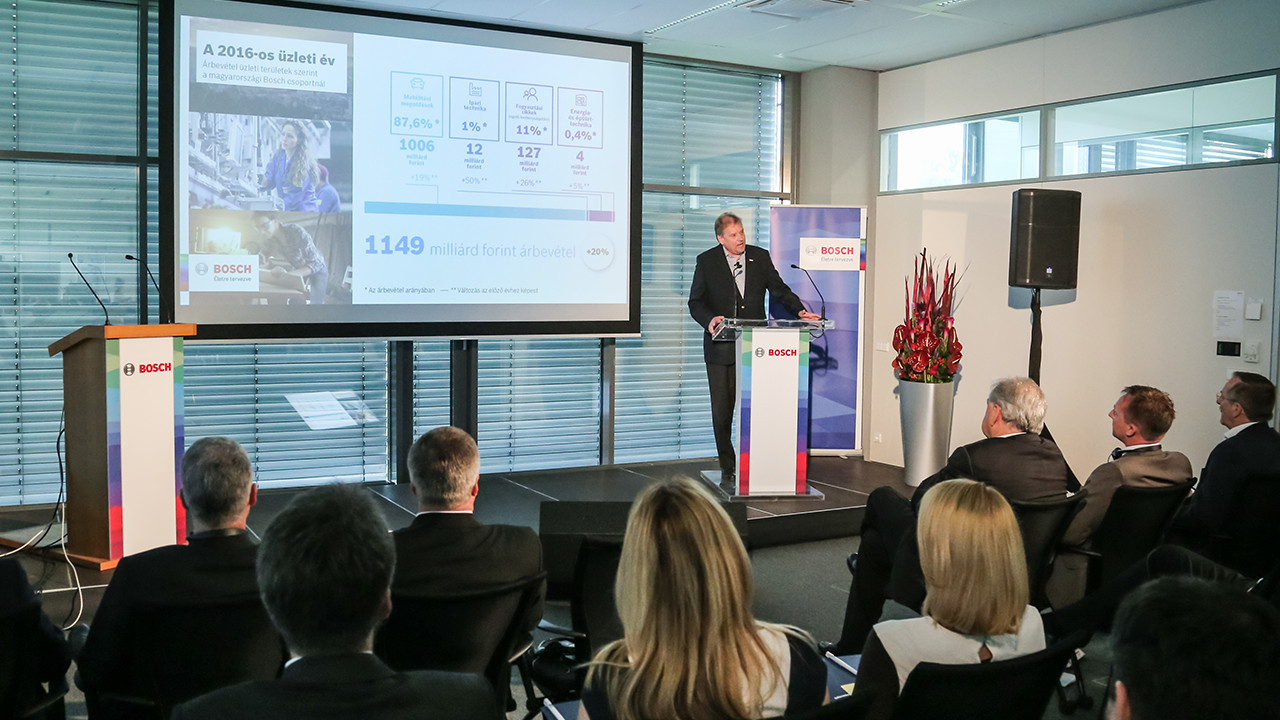 Budapest – Bosch in Hungary, the leading global supplier of technologies and services, is increasing its importance in the Bosch world. Including sales of non-consolidated companies and internal deliveries to affiliated companies, its total net sales in Hungary amounted to 1149 billion forints in 2016, twenty percent higher than the previous year. Sales on the Hungarian market, due to challenging market conditions, contracted by three percent to 238 billion forints in the same period. At the company’s annual press conference in Budapest, Daniel Korioth, representative of the Bosch Group in Hungary, said, “Our success within Bosch is providing us with the opportunity to focus on shaping the future.” He added, “We not only produce but also develop products for connected life. For the current year, we are confident that our business in Hungary will grow further.” 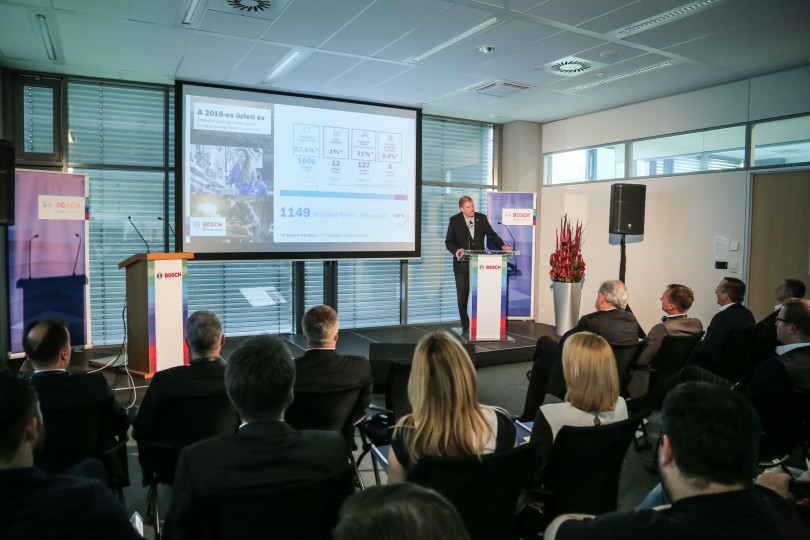 Bosch invested a total of 72 billion forints in Hungary in 2016, 16 percent higher than in 2015. One of the key investments the company will finish in coming years is the Hatvan logistics park, set to be one of the company’s most important logistics centers. Construction is planned to start in June, and the facility will open in the second quarter of 2018. Bosch’s commitment to Industry 4.0 has had a key role in launching the project. The new 62,000 square meters logistics center will incorporate and interconnect a wide range of Industry 4.0 equipment, applications and processes.

In 2016, Bosch in Hungary spent a total of 47 billion forints on research and development, an increase of more than 25 percent compared to the previous year. The Engineering Center Budapest (ECB) is continuously expanding. They are working on future mobility, focusing on automated driving and electrification. To prepare for the rapid technological changes forecast for the next few years, the Bosch Group is planning further expansions to its Budapest site according to the pace of the past years. To accommodate the new-generation development projects in the ECB, Bosch has purchased a new 60,000 square-meters site beside the actual Bosch Campus.

The Bosch workforce was one of the fastest-growing in the Hungarian private sector. The company created new jobs that brought the headcount to more than 14,200 (as of 1 January 2017), 2000 higher than it was in 2015. This has made Bosch the largest industrial employer in Hungary. “Bosch is constantly strengthening its presence in Hungary and continues to plan for the long term. The company’s work on future-shaping technology requires highly qualified people.” said Korioth. “Bosch is making major efforts in this area, deploying its knowledge and experience of many decades to support the formation of a new technically educated generation that can meet the needs of the labour market.” he added. Due to the company’s rapid development including several new projects, Bosch in Hungary is looking for several hundred high-skilled engineers and technicians at its locations in Budapest, Hatvan, Maklár and also Miskolc. That is why Bosch places great emphasis on education, especially engineering and professional training in Hungary. It has cooperation with 19 educational institutes with a wide palette of education possibilities from practice-oriented dual training through Bosch departments at universities to community college trainings.

Development and expansion in other business sectors

Future-shaping technologies requires the right people in other areas as well. In the Miskolc power tools plant, 10.5 million power tools rolled off the production lines last year, and the production of roughly ten new products started – including cordless DIY, garden tools and also multifunctional professional tools. The development center in Miskolc, which includes the DIY tool and the professional tool development team, now employs more than 160 engineers and has become a significant engineering center of the North East Region of Hungary.

For 2017, in light of a subdued economic outlook and geopolitical uncertainty, Bosch aims to achieve sales growth of between three and five percent. And despite still heavy upfront investments in safeguarding the company’s future, result is set to rise. “Business success today gives us the leeway to shape tomorrow’s world,” said Dr. Volkmar Denner, the chairman of the Bosch board of management. “As an innovation leader, we are shaping and driving transformation” Denner added. The focal points of this transformation are changes in the mobility sphere and IoT connectivity. By 2020, all Bosch’s new electronic products will feature connectivity. The key to this is artificial intelligence (AI). Over the next five years, Bosch will be investing 300 million euros in its own center for artificial intelligence.

Bosch has been present in Hungary since 1898. After its re-establishment as a regional trading company in 1991, Bosch has grown into one of Hungary’s largest foreign industrial employers. In fiscal 2016, its ten Hungarian subsidiaries had a total turnover of HUF 1149 billion and sales of the Bosch Group on the Hungarian market – not counting trade among its own companies – was HUF 238 billion. The Bosch Group in Hungary employs more than 14,200 people (as per January 1, 2017). In addition to its manufacturing, commercial and development business, Bosch has a network of sales and service operations that covers the entire country.