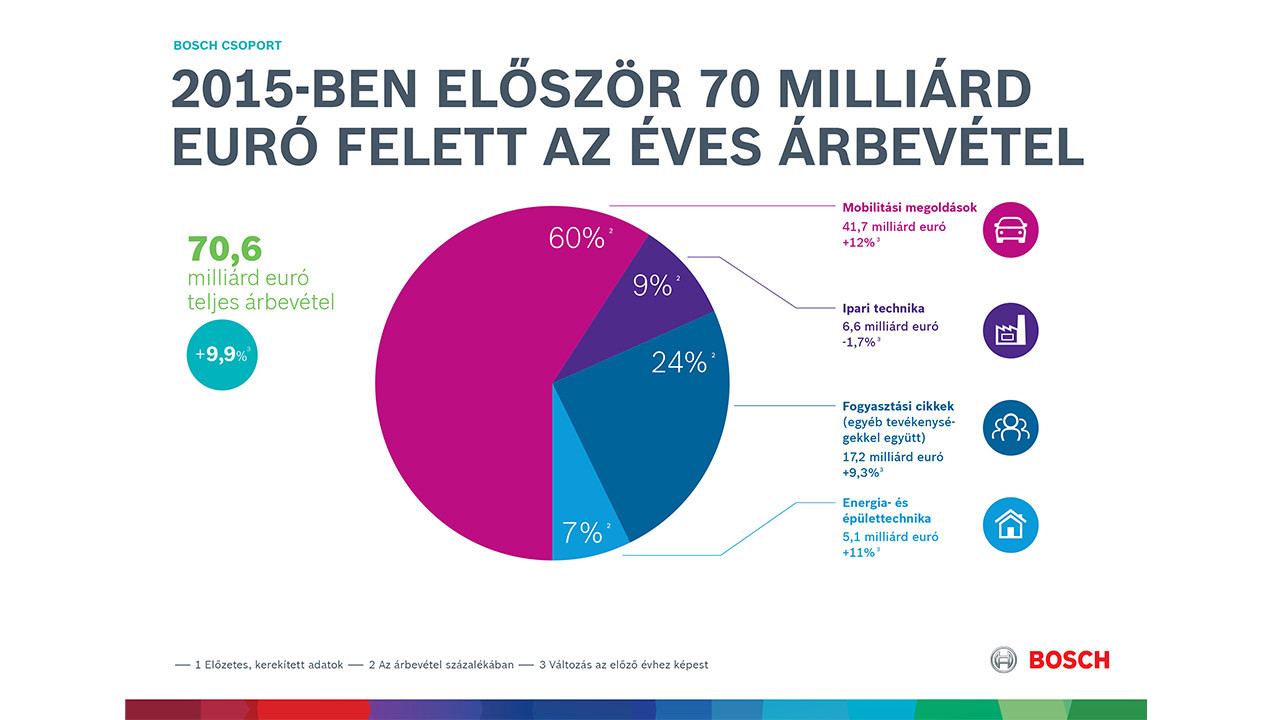 Stuttgart – In 2015, the Bosch Group recorded sales of over 70 billion euros for the first time, according to preliminary figures. The company succeeded in increasing revenue by approximately ten percent1 last year. Earnings also further improved. Including extraordinary effects, earnings before interest and taxes (EBIT) rose to around five billion euros. Adjusted for extraordinary effects, earnings totaled roughly 4.5 billion euros. EBIT margin from operations was approximately 6.5 percent, which is higher than the previous year when calculated on a comparable basis. Equity ratio remains sound and liquidity remains high despite the billions spent on the acquisitions of BSH Hausgeräte GmbH and Robert Bosch Automotive Steering GmbH. “Thanks to our innovative strength, we were able to successfully continue our growth trend in a challenging business environment and a number of stagnating markets in 2015. A major driver of this positive business development was an increasing number of solutions for the connected world,” said Dr. Volkmar Denner, chairman of the board of management of Robert Bosch GmbH. 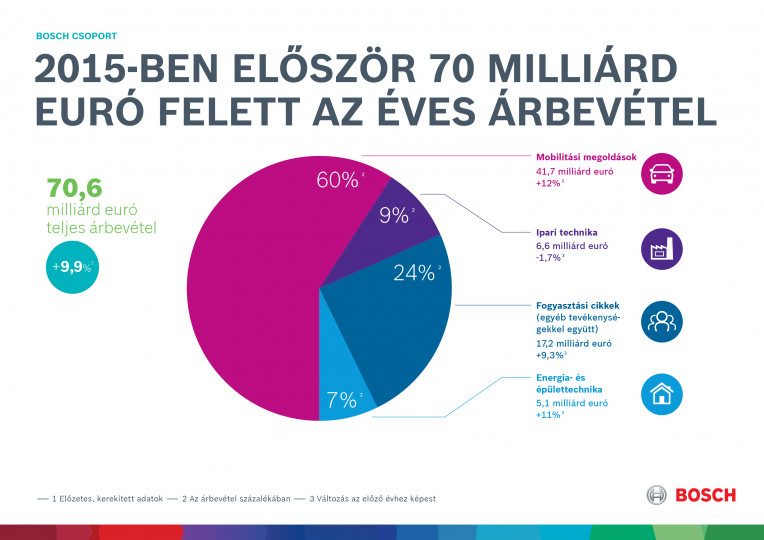 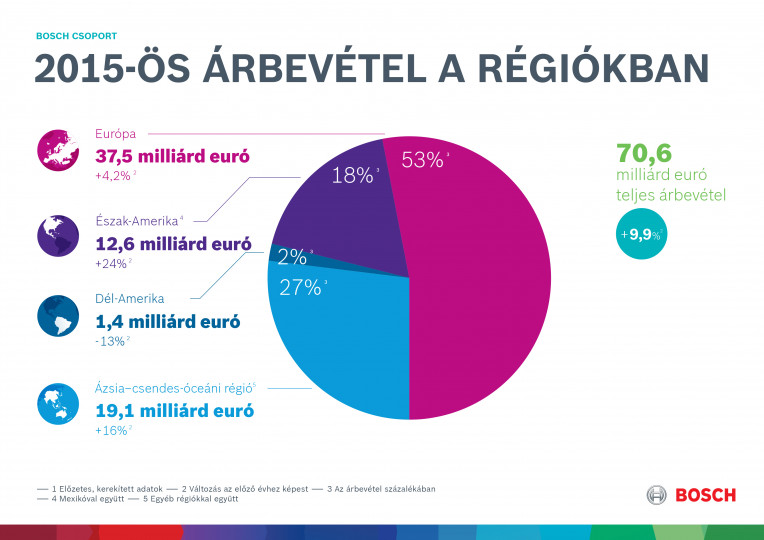 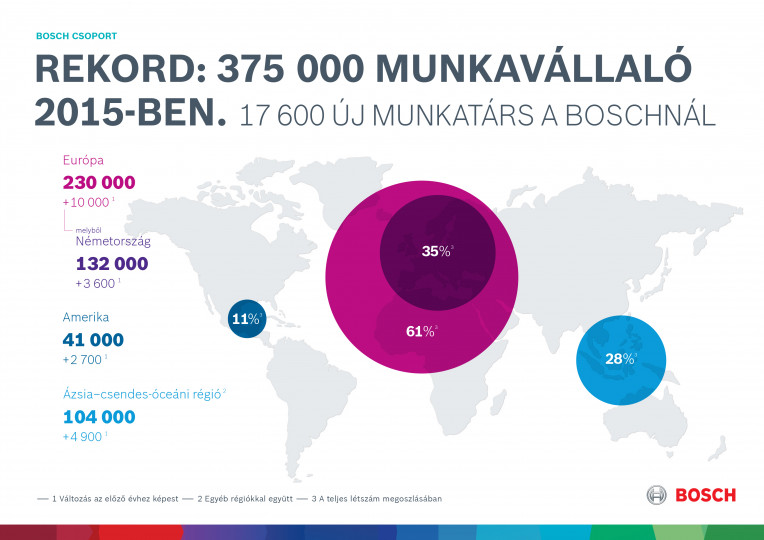 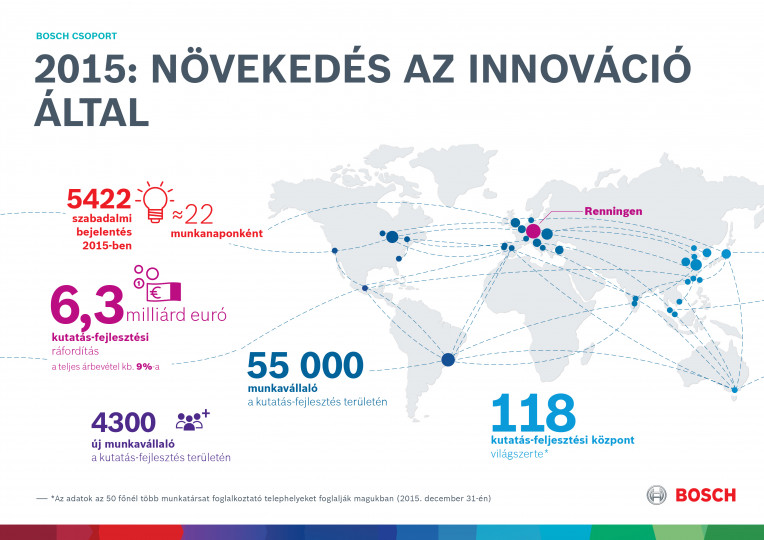 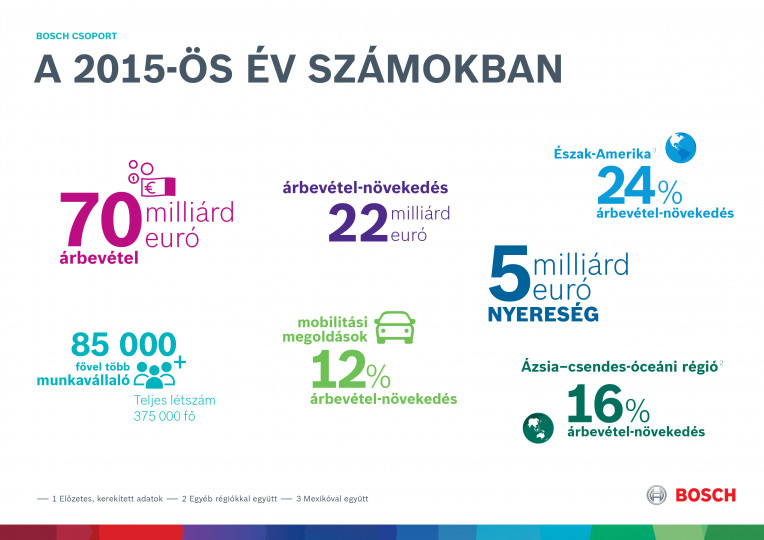 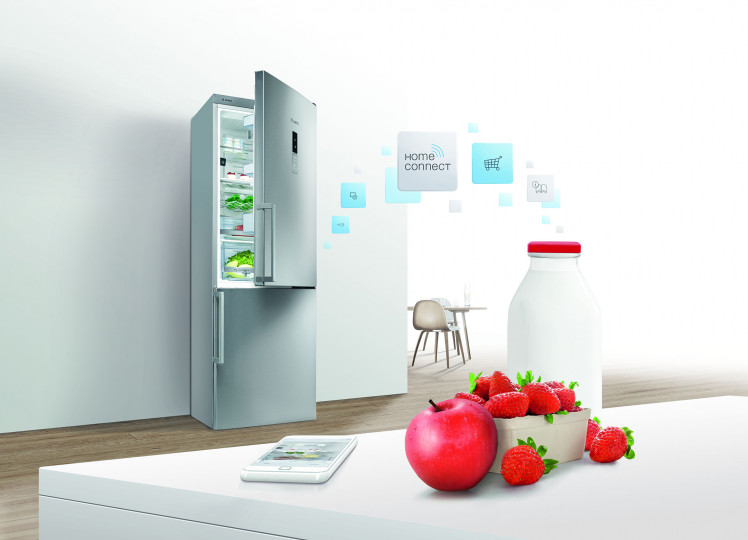 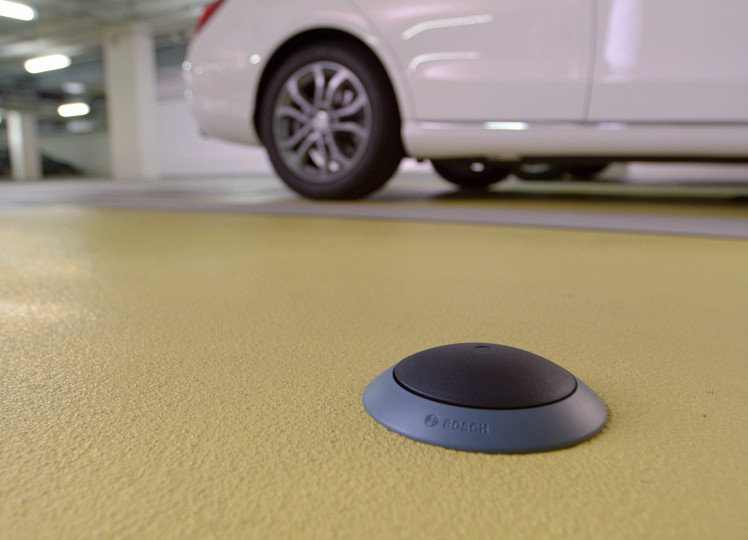 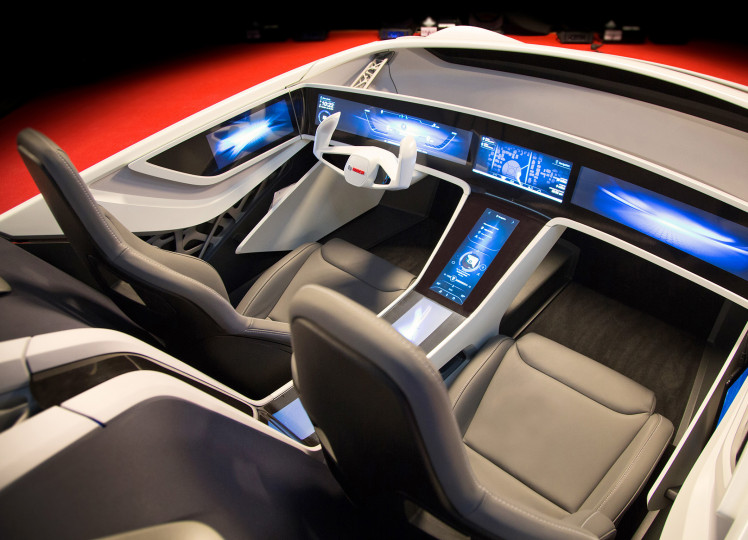 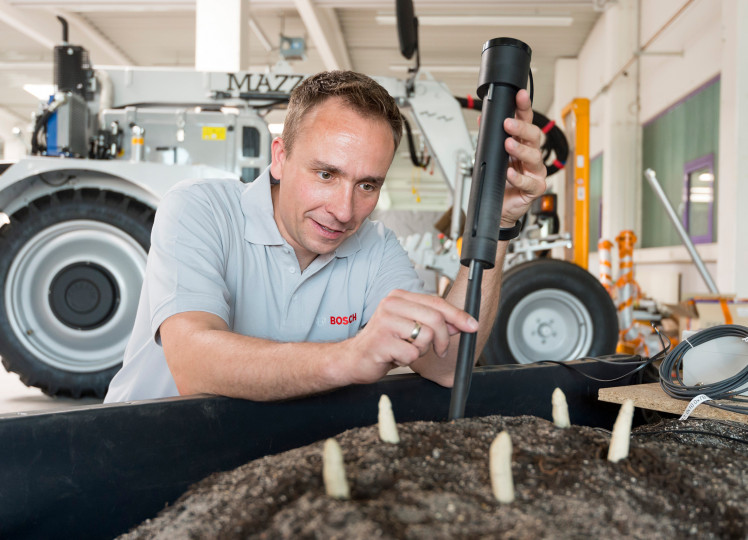 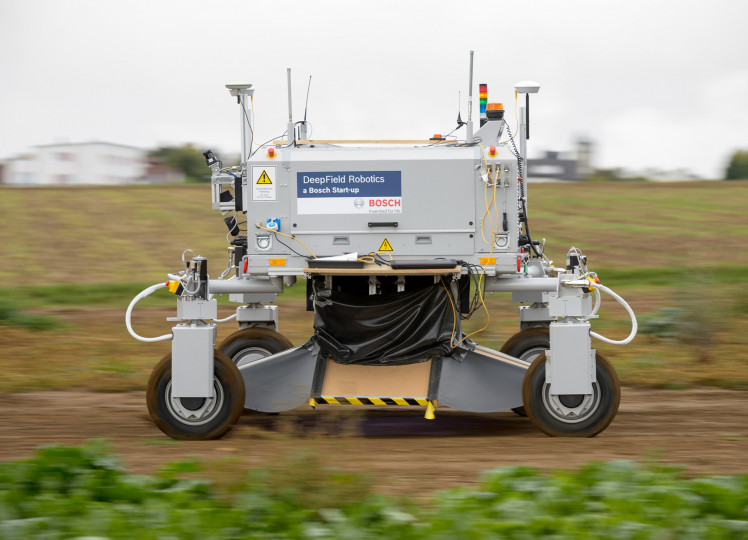 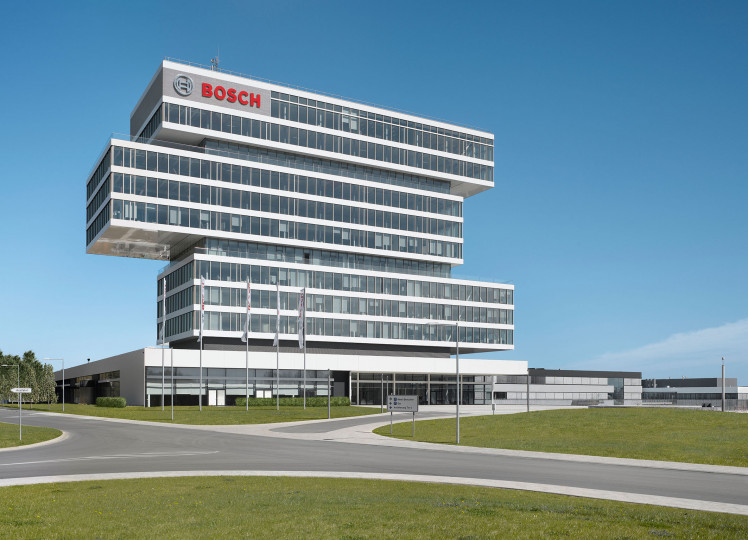 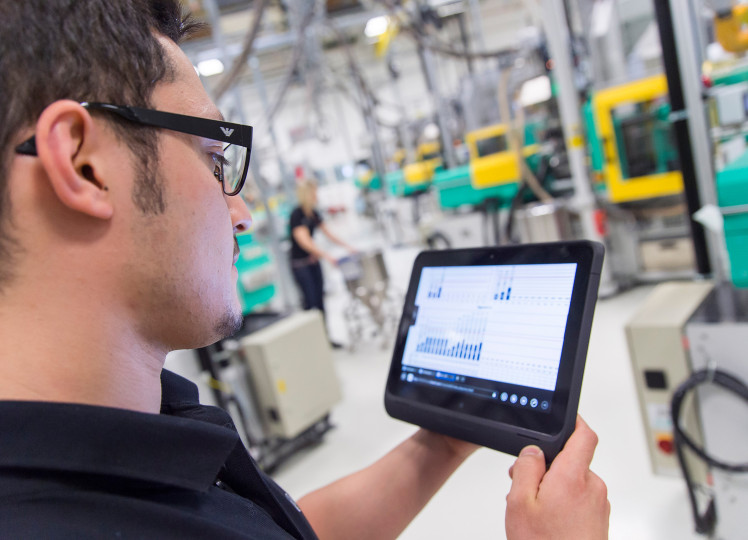 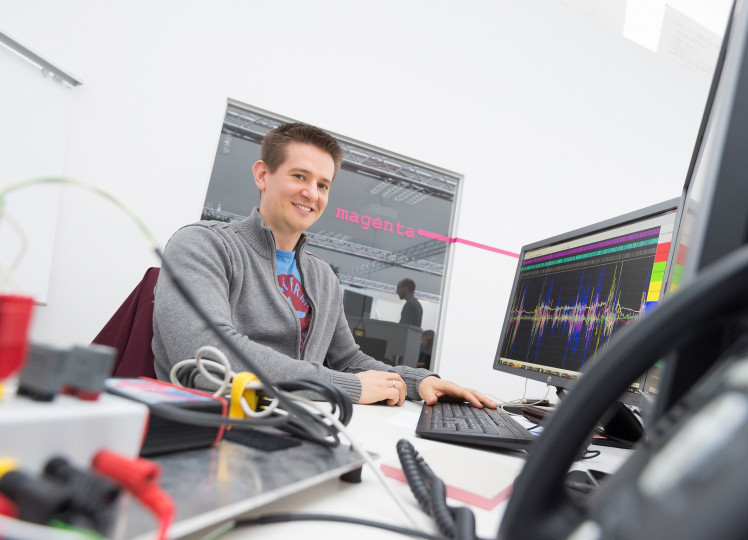 Bosch is shaping the digital transformation
In particular, connectivity over the internet of things is currently transforming Bosch’s business, in some cases at a fundamental level. Bosch is the only company worldwide that is active on all three levels of the internet of things. The Bosch Group offers key technologies that enable connectivity such as sensors and software, and is also developing new services on this basis. “With our expertise in sensors, software, and services, we’re shaping the connected world and opening up new business opportunities. The ‘digital transformation’ is anything but a threat to us. Instead, we see it as an enormous opportunity,” Denner continued. Just a few weeks ago, for example, the company announced its entry into the smart-home market. At CES in Las Vegas, Bosch presented its smart-home system to the public for the first time.

Business performance in 2015 by business sector
Sales developments in 2015 varied across the four business sectors. As Dr. Stefan Asenkerschbaumer, the CFO and deputy chairman of the board of management, explained, “In 2015, we further improved our market position and competitiveness in many areas, and gained market share.” Despite only anemic growth in global vehicle production, the Mobility Solutions business sector succeeded in significantly increasing sales, according to preliminary figures. Overall, sales grew by twelve percent to 41.7 billion euros in 2015. Among Bosch’s most successful products last year were gasoline and diesel injection systems, driver assistance systems, and infotainment systems. The Consumer Goods business sector also recorded very robust growth. Here, Bosch was able to increase its sales by 9.3 percent year on year to 17.2 billion euros. This sector’s best-selling products included cordless power tools and household appliances such as a connected range of stoves.

The Energy and Building Technology business sector recorded growth of eleven percent, which was considerably higher than the previous year. The sector generated sales of 5.1 billion euros. This success can be primarily attributed to services, security systems for large infrastructure projects, and connected smart-heating solutions. The Industrial Technology business sector continues to be affected by weakness in the global mechanical engineering segment. Sales fell by 1.7 percent year on year to 6.6 billion euros. The Drive and Control Technology division suffered further collapses in important segments of the mechanical engineering market in 2015.

Business performance in 2015 by region
Bosch’s business in Europe developed encouragingly in 2015. Sales growth in the region was considerably stronger than in 2014: according to preliminary figures, Bosch increased its sales by 4.2 percent to 37.5 billion euros. Sales developed positively in Germany as well. Bosch recorded a particularly sharp sales increase in North America. There, the technology and services company’s revenues grew by a significant 24 percent to 12.6 billion euros. In South America, the situation remains difficult. This is reflected in the Bosch Group’s sales development as well. According to preliminary figures, sales of 1.4 billion euros were recorded in 2015, which is 13 percent less than in the previous year. In Asia Pacific, Bosch recorded sales growth of 16 percent to 19.1 billion euros. Bosch sees long-term potential in Africa. In 2015, the company continued expanding its activities there.

2016 – cautiously optimistic outlook
For 2016, Bosch is forecasting only moderate growth of 2.8 percent for the global economy. “We also have to prepare ourselves for stronger fluctuations in our markets, both regionally as well as in specific industries,” Asenkerschbaumer said. Geopolitically, the situation in 2016 will remain complex and characterized by considerable uncertainty. Regardless of this, Bosch wants to continue its growth trend in the current year and to grow faster than its various markets. Despite enormous investments to secure the company’s long-term viability, result and EBIT from operations are to be further improved.

A simpler, easier, and all-around better life with connected solutions
Bosch’s strategic aim is to offer solutions for connected mobility, connected production, as well as for connected energy systems and buildings. The company launched a number of new solutions in this area in 2015. “Connected technology is the key to meeting the challenges of the future, such as the scarcity of resources and urbanization,” Denner said. For example, in an intelligently connected building, energy consumption can be reduced by up to 40 percent. By 2020, some 230 million or 15 percent of all households worldwide will be equipped with smart-home solutions. “Connected technology and systems must offer easy and intuitive operation for users,” Denner continued. For this reason, the development of the Bosch smart-home system focused on user experience. Featuring a single platform, the system enables the intelligent networking of devices such as heating, household appliances, entertainment systems, lighting, as well as security systems. All the connected devices in a home can be operated via smartphone or tablet with a single app.

Build on strengths in familiar areas, dare to tap into new areas
“We’re tapping into new, promising markets such as smart homes and connected industry, and at the same time seizing every opportunity that presents itself in our traditional markets,” Denner said. These opportunities include the electrification of mobility. One of the most important acquisitions of 2015 was the acquisition of the U.S. battery technology startup Seeo Inc. Bosch now possesses pioneering know-how in the area of solid-state cells. As Denner explained, “regardless of whether this business develops in an evolutionary or disruptive way, Bosch will be part of it.” Bosch also sees great potential in the two-wheeler and commercial-vehicle segments. For both segments, the company recently established dedicated units in order to better serve market and customer needs. Automation, electrification, and connectivity – the three major trends in mobility – will also have a long-term impact on commercial vehicles and two-wheelers. In the commercial vehicle segment, automation will play an increasingly important role in reducing accidents. Injection systems for two-wheelers – as opposed to the carburetor systems common today – reduce fuel consumption and thus make an important contribution toward resource conservation, particularly in developing countries.

Greenhouse-gas reduction – impossible without diesel engines
In this context, Denner also emphasized the importance of diesel technology for meeting global warming targets. “It is only with diesel, for example, that the EU’s ambitious CO2 targets can be reached.” Diesel vehicles emit significantly less CO2 than comparable gasoline vehicles. “In the debate about air quality and particulate matter in our cities as well, diesel is not part of the problem, but part of the solution,” Denner said. Thanks to modern filter technology, he went on, a diesel vehicle can even purge particulate matter from the ambient air in large cities. “The diesel is an air-cleaning machine.” Denner repeated his conviction that the diesel powertrain can become even better. Bosch has the technology, he said, to bring diesel nitrogen oxide emissions to an extremely low level, even in real driving conditions. “It is our development goal to get diesel vehicles complying with current standards not only at the test bench, but also on the roads,” he went on. For some time now, therefore, Bosch has explicitly supported the introduction of a more realistic test cycle and of real-driving emissions measurements. Denner also spoke out in favor of regular checks of production vehicles by independent testing institutes.

Note
The difference between the 2015 sales figure and the previously disclosed 2014 figure of 49 billion euros is partly the result of BSH Hausgeräte GmbH and Robert Bosch Automotive Steering GmbH being fully consolidated for the first time. 15 billion euros of this increase is attributable to consolidation effects alone.

2Figures for 2014 are stated on a comparable basis, including Robert Bosch Automotive Steering GmbH and BSH Hausgeräte GmbH.