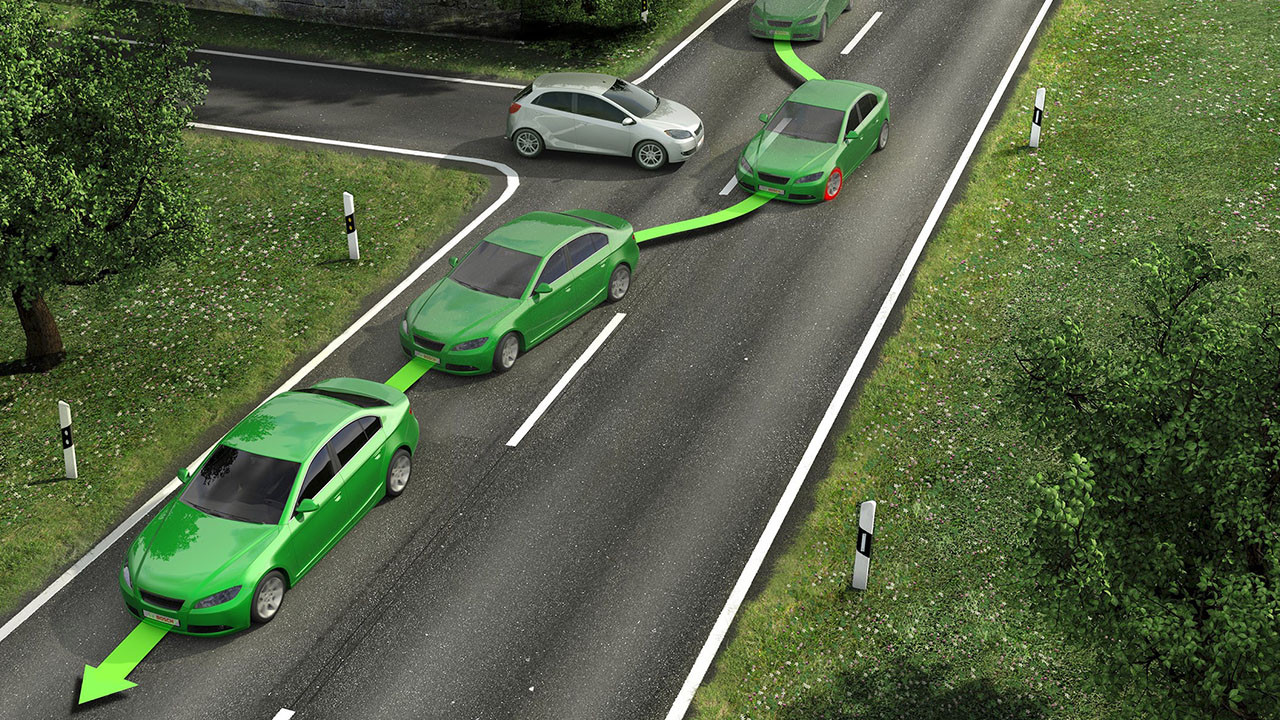 In the European Union, the ESP electronic stability program will soon be a universal standard. Effective November 1, 2014, all newly registered passenger cars and light commercial vehicles with a gross vehicle weight of up to 3.5 metric tons must be equipped with the anti-skid system. The regulation will take effect for all other vehicles one year later. “ESP saves lives,” says Gerhard Steiger, president of the Bosch Chassis Systems Control division. An accident research study by Bosch confirms its effectiveness. In 2011, ESP prevented more than 33,000 accidents involving injury and saved more than 1,000 lives in the EU member states (of which there were 25 at the time), even though ESP was only installed in an estimated 40 percent of vehicles. Since being launched in 1995, ESP has prevented 190,000 accidents and saved more than 6,000 lives across Europe. 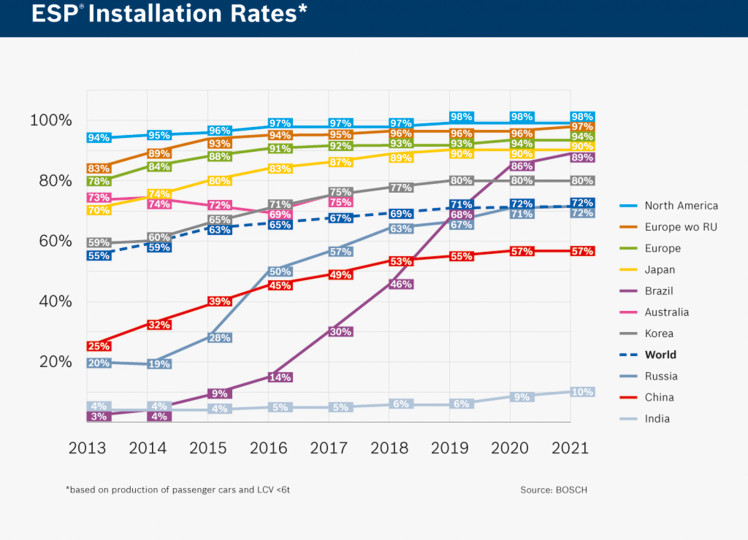 Safe evasive maneuvering thanks to ESP

ESP is a global success story

After the seat belt, ESP is the most important vehicle safety system − it is even more important than the airbag. Bosch has manufactured 100 million ESP systems since series production began in 1995. While 84 percent of all new vehicles in Europe were equipped with the anti-skid system in 2014, the figure for all new vehicles worldwide was only 59 percent. “ESP is an unparalleled success story that we hope to replicate outside Europe as well,” says Gerhard Steiger. According to independent studies, up to 80 percent of skidding accidents on the road could be prevented if all vehicles were equipped with the anti-skid system.

ESP – a true all-rounder that offers a lot of added value
Swerving on dry, wet, muddy, or slippery roads often results in severe traffic accidents. Using smart sensors, ESP compares 25 times per second whether the car is actually moving in the direction that the driver is steering it in. If the measured values do not match, the anti-skid system intervenes and first reduces engine torque. If that is not sufficient, it additionally brakes individual wheels, generating the counterforce needed to keep a vehicle on course.

ESP is the logical next step in the further development of the ABS antilock braking system created by Bosch in 1978. Today, ESP is much more than a mere anti-skid system. A number of value-added functions now account for most of its performance, including the ability of ESP to prevent a vehicle from rolling backwards during hill starts. It is also able to stabilize swerving trailers and to reduce the rollover risk of sports utility and light commercial vehicles.

ESP is the basis for many driver assistance systems
The electronic stability program also plays a key role when it comes to many driver assistance systems and automated driving, which is why its development is always ongoing. Bosch offers ESP as a modular concept that offers the right system for all circumstances and requirements, which ranges from the affordable ESP light for entry-level cars in emerging markets and special systems for commercial vehicles all the way to ESP hev regenerative braking systems for hybrid and electric vehicles.

With its customized solutions, Bosch supports the worldwide efforts of manufacturers and governments to make active safety systems standard equipment in every vehicle. Other countries have also begun to recognize that ESP is extremely important for road safety. Since September 2011, ESP has been mandated for all vehicles in the United States and Canada with a gross vehicle weight up to 4.5 metric tons. Australia and Israel have also made ESP mandatory. Similar regulations will take effect in Japan, Korea, Russia, and Turkey in the years ahead.

The Bosch Group is a leading global supplier of technology and services. In 2013, its roughly 281,000 associates generated sales of 46.1 billion euros. (NB: Due to a change in accounting policies, the 2013 figures can only be compared to a limited extent with the 2012 figures). Its operations are divided into four business sectors: Mobility Solutions (former Automotive Technology), Industrial Technology, Consumer Goods, and Energy and Building Technology. The Bosch Group comprises Robert Bosch GmbH and its roughly 360 subsidiaries and regional companies in some 50 countries. If its sales and service partners are included, then Bosch is represented in roughly 150 countries. This worldwide development, manufacturing, and sales network is the foundation for further growth. In 2013, the Bosch Group invested some 4.5 billion euros in research and development and applied for some 5,000 patents. This is an average of 20 patents per day. The Bosch Group’s products and services are designed to fascinate, and to improve the quality of life by providing solutions which are both innovative and beneficial. In this way, the company offers technology worldwide that is “Invented for life.”