Economic and technological strength for the business of the future 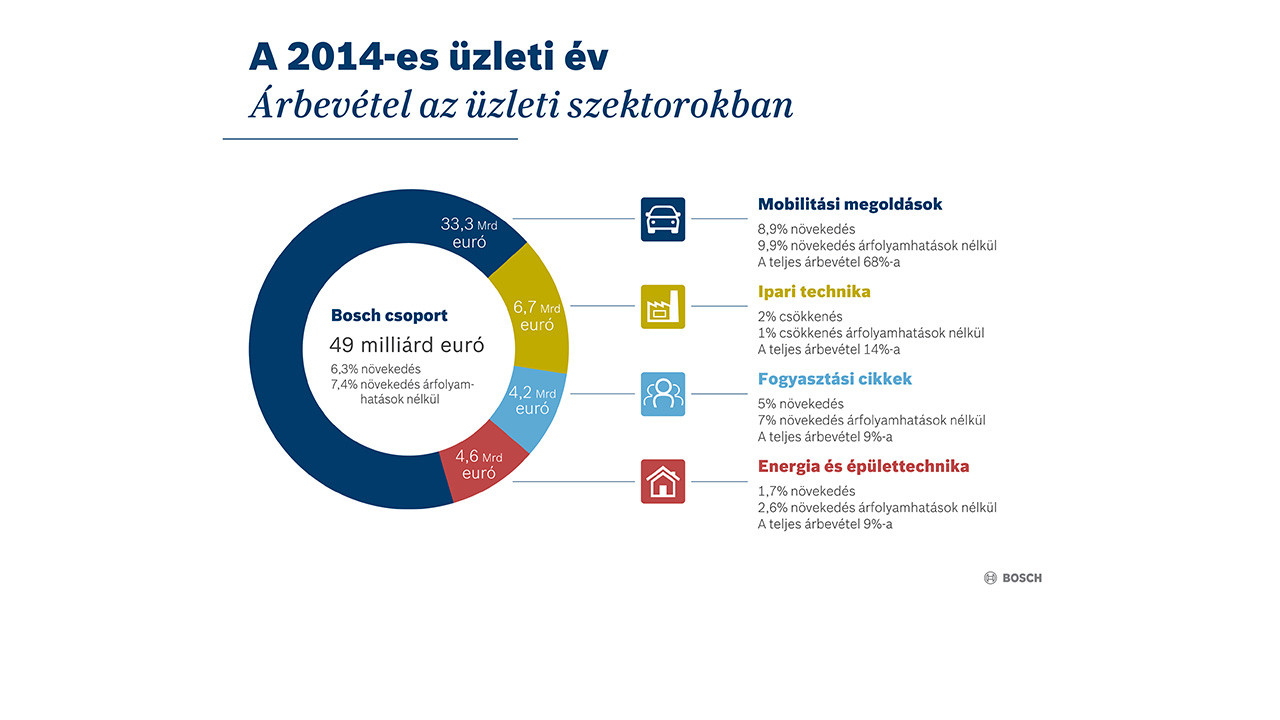 Stuttgart – The Bosch Group has made a good start to 2015. In the first quarter, sales grew by roughly 13 percent.1 After adjusting for exchange-rate effects, the increase was 5.4 percent. For the current fiscal year, the global supplier of technology and services expects its sales to grow 3 to 5 percent after adjusting for exchange-rate effects. Because these effects are considerable, Bosch expects its nominal sales growth to be higher than this range. Presenting the annual financial statements in Gerlingen, Germany, Dr. Volkmar Denner, the chairman of the Bosch board of management, said: “Our economic and technological strength in our established fields of business allows us to open up new market segments.” Internet-enabled products and internet-based services are one of the focal points of the company’s future sales growth. “We are driving connectivity forward in all our business sectors and playing an active role in shaping it,” Denner added. In 2014, Bosch launched many new products and connectivity solutions. They include web-enabled ovens and software solutions for connected heating systems and buildings, as well as for connected industry and connected mobility. 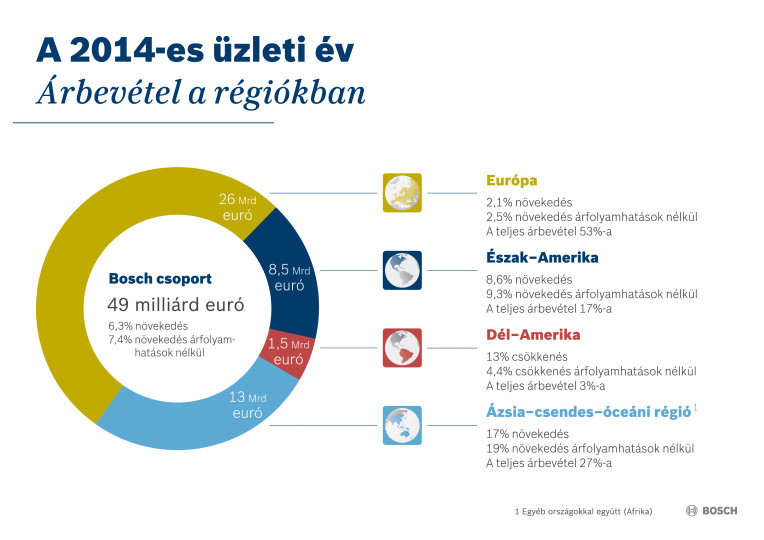 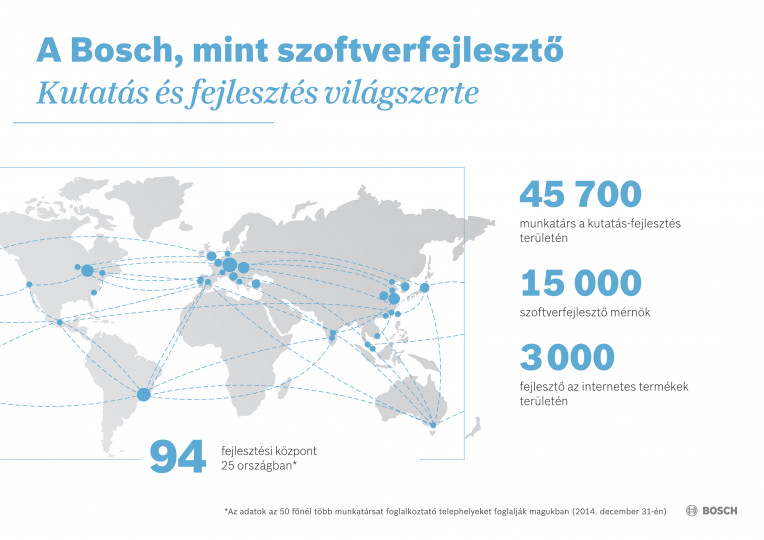 Business developments in 2014: significant progress
In 2014, product innovations again helped Bosch to further improve its market position in many areas. In the past business year, the company increased its sales by a nominal 6.3 percent to 49 billion euros. Adjusted for exchange-rate effects, growth was 7.4 percent. As a result of negative exchange-rate effects to the tune of some 500 million euros, the temporarily strong euro had a considerable impact on the sales figure. This strong development of sales also contributed to an improved result. Earnings before interest and taxes (EBIT) rose to 3 billion euros last year – a year-on-year increase of roughly 10 percent. Bosch thus disclosed an EBIT margin of 6.2 percent in 2014. This is roughly one percentage point better than the value for 2013, adjusted for one-off and extraordinary effects. “Our rigorous work on costs also played a part in this significant improvement in result. In 2014, we were successful despite only moderate global economic growth,” said Dr. Stefan Asenkerschbaumer, the Bosch chief financial officer and deputy chairman of the board of management. Following the complete takeover of BSH Bosch und Siemens Hausgeräte GmbH (now BSH Hausgeräte GmbH), the supplier of technology and services has strengthened its position in the area of smart homes. And with the acquisition of ZF Lenksysteme GmbH (now Robert Bosch Automotive Steering GmbH), Bosch has added to its portfolio in the growth area of automated driving.

Mobility solutions for tomorrow’s traffic
For Bosch, automated driving is a significant area of growth. The company is successively launching new driver assistance systems. For example, 2015 will see the start of series production of remote-controlled parking, the traffic jam assist, and an assistance function for evasive maneuvers and turning against oncoming traffic. In the Mobility Solutions business sector, more than 2,000 engineers are working to make the auto pilot for drivers a reality. When it comes to the mobility of the future, Bosch is not only concerned with automation, but also with connectivity and electrification. As of now, the company has received 30 orders relating to electrical powertrains. Each year, Bosch invests nearly 400 million euros in electromobility, not least in further developing battery technology. “We were instrumental in the success story of the diesel. We want to do the same for the electrical powertrain,” Denner said. One key to the market success of electrical powertrains is their suitability for everyday use. For example an app developed by Bosch gives drivers access to a network covering 80 percent of all web-enabled charge spots in Germany. For users, this means that recharging their electric vehicles is easy.

Today, Bosch sees itself as a supplier of mobility solutions that cover more than just the car. In 2014, systems such as gasoline and diesel direct injection were once again extremely successful. Increasingly, they are being joined by software solutions and mobility services. “Connectivity makes completely new solutions possible for the multimodal traffic of the future. And in established areas as well, it will play a significant role in creating customer benefit and conserving resources,” Denner said. Last year, for example, Bosch debuted connected electronic engine management systems for two wheelers. Riders can use their smartphones to read and evaluate vehicle data.

Growing significance of software competence
In the connectivity business, there is a new “3S”: sensors, software, and services. Bosch is the globally leading manufacturer of micromechanical sensors, more commonly known as MEMS sensors. This year, it will manufacture 1.6 billion such “sensory organs,” nearly 25 percent more than in the previous year. Moreover, for some years now, the technology company has been expanding its software competence. Today, one in three of the 45,700 associates working in research and development is a software engineer. Three thousand engineers are working on the internet of things alone. “For Bosch, software expertise is a key competence for the future,” Denner said. “Embedded software is already one of our strong points, and we are successively adding to this with IT software know-how.” Only recently, Bosch acquired the connectivity specialist ProSyst, a supplier of gateway software and middleware. In smart homes, ProSyst’s software acts as an interpreter for the devices of different manufacturers.

Bosch IoT suite: platform for the internet of things
One central software platform for the internet of things is the Bosch IoT suite. It orchestrates communication and data exchange between web-enabled objects such as factory machinery, heating systems, and security cameras. The Bosch IoT suite can also analyze and process the kind of big data generated in areas such as connected manufacturing. Bosch also makes parts of its IoT suite accessible for open-source developers. “Our IoT suite is meant as an invitation to participate. In shaping the connected world, we put our faith in open solutions, since we believe they will drive forward the manufacturer-independent networking of devices and machines,” said Denner, whose responsibilities on the Bosch board of management include research and advance engineering.

A multitude of services on the internet of things
According to Denner, the business potential of the internet of things lies above all in the services that can be derived from connectivity. “Bosch is in equal measure a supplier of technology and services, and both are an advantage for us in the connectivity business.” Even today, Bosch offers a wide range of service solutions for many industries and customers. For example, its Security Systems division offers telematics services such as eCall for 500,000 vehicles in 16 languages. By the end of 2015, Bosch will have facilitated the connectivity of some 100,000 vehicles for the fleet management of leasing and insurance companies. At the Hannover trade fair, Bosch presented its remote service manager. In connected manufacturing, it makes the remote maintenance of machinery possible.

Data security and data protection in the connected world
With growing connectivity, there is also a growing demand for data security and data protection. “The decisive factor for the widespread acceptance of connected solutions will be data protection, and thus people’s trust,” Denner said. In this context, the Bosch CEO called for rapid adoption of the EU General Data Protection Regulation. “Both legally and technologically, there is still much to be done to make Europe truly ready for the internet of things.” In the area of data security, the company is already in good shape. Bosch employs more than 100 associates who specialize in secure data transfer. The company operates a center of competence in which it brings together relevant know-how in areas such as cryptographic methods and the management of certificates.

The business year 2014 by region and business sector

Asia Pacific: growth region number one
In Asia Pacific, Bosch grew its sales 17 percent (19 percent after adjusting for exchange-rate effects) in 2014, to 13 billion euros. At just under 27 percent of total sales revenue, the region’s share of sales reached a new high. Sales growth was especially strong in China, rising a nominal 27 percent to 6.4 billion euros.

Americas: significant growth in North America, difficult environment in South America
Our business in North America developed very well, growing 8.6 percent to 8.5 billion euros. Adjusted for exchange rates, the increase was as much as 9.3 percent. In South America, weak automotive production and weakness of the Brazilian real had a negative effect on sales developments. At 1.5 billion euros, sales were down by an exchange rate-adjusted 4.4 percent on the previous year. In nominal terms, the drop in sales was 13 percent.

Mobility Solutions: growth twice as fast as the market
The Mobility Solutions business sector was once again able to accelerate its rate of growth. Sales rose 8.9 percent (9.9 percent after adjusting for exchange-rate effects) to 33.3 billion euros. Bosch thus grew twice as fast as the automotive market. The business sector’s EBIT was 2.4 billion euros, and its EBIT margin 7.2 percent. Without one-off and consolidation effects, the year-on-year improvement in operating result is roughly 0.9 percentage points.

Industrial Technology: back on a growth path
In 2014, the Industrial Technology business sector’s sales amounted to 6.7 billion euros, a nominal 2 percent below the previous-year level (1 percent after adjusting for exchange-rate effects). This slight drop is due to a weak market, as well as to the divestment of the sector’s pneumatics business in early 2014. Excluding this consolidation effect, sales increased by 2.5 percent, and 3.6 percent after adjusting for exchange-rate effects. All in all, Industrial Technology improved its EBIT to 67 million euros.