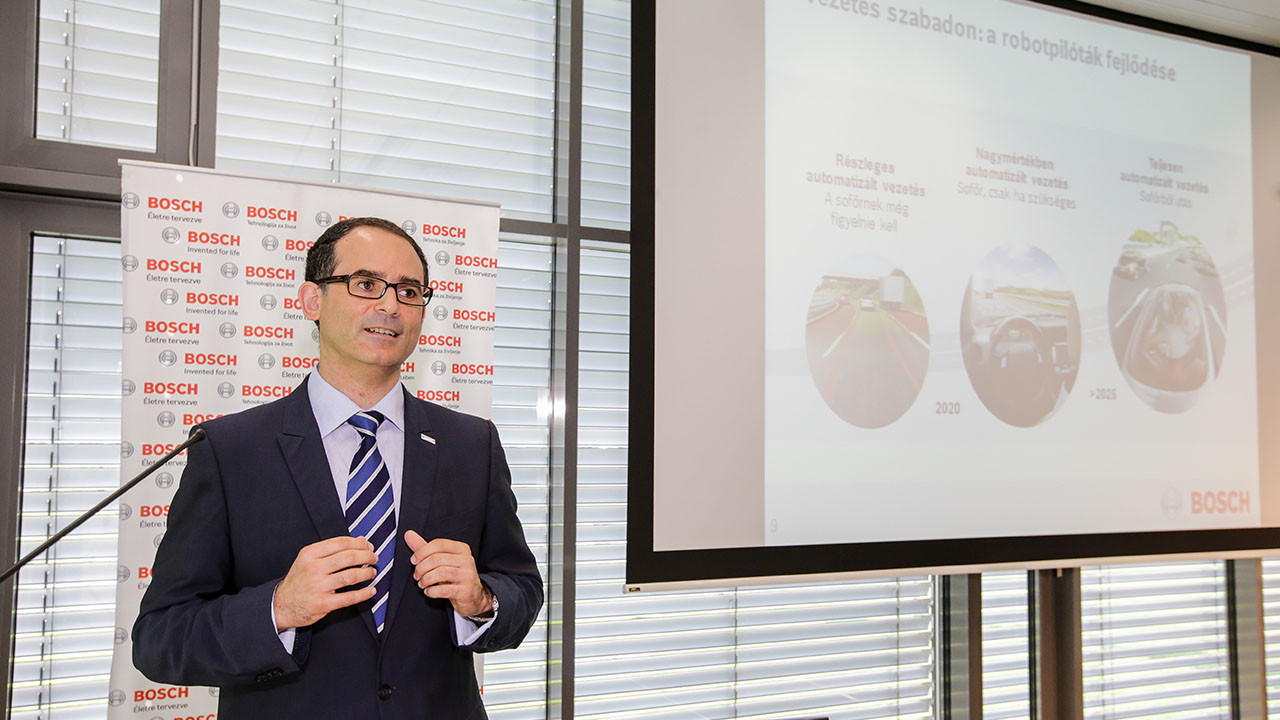 Note: Due to a change in accounting policies, the 2013 figures can only be compared to a limited extent with the previously published figures for 2012. The decision to forego the application of proportionate consolidation affects mainly BSH Bosch und Siemens Hausgeräte GmbH and ZF Lenksysteme GmbH, and the companies owned by them.

Budapest – Bosch, a leading global supplier of technology and services, increased total net sales in Hungary including sales of non-consolidated companies and internal deliveries to other Bosch companies by 15 percent to HUF 719 billion in 2013. Sales on the Hungarian market increased by more than 20 percent to HUF 161 billion *based on an adjusted previousyear figure of HUF 133 billion. “2013 was a year of dynamic growth for Bosch in Hungary in every respect: a strong sales performance thanks to a recovering demand, a high expansion of our workforce, and an increase in our research and development spending” said Javier González Pareja, representative of the Bosch Group in Hungary, at the company’s annual press conference in the country. “We are confident that we will continue our positive development in Hungary: This year we are also expecting to increase our sales, and to further strengthen our research and development activities in Hungary,” he added.

Expanding presence – Now three development centers in Hungary
Hungary is an increasingly important R&D center within the Bosch Group. In the last four years, Bosch has more than doubled its research and development expenditure in the country, a tribute to the capabilities of Hungarian engineers. The company invested HUF 19 billion in R&D in Hungary in financial 2013, an increase of more than 10 percent from the year before.

Following the development centers for automotive products in Budapest and power tools in Miskolc, Bosch has recently opened a third development base in Miskolc which also serves the automotive industry. “The opening of our new starter motor and alternator development center in Miskolc is a milestone for Bosch in Hungary,” said González. Projected investment is HUF 594 million by 2017. The center currently employs 40 engineers and plans to more than double the headcount by 2016.

An outstanding example of successful innovation is the power tool IXO, which celebrated its tenth anniversary last year. In 2003, the Bosch IXO was the first screwdriver worldwide to be powered by a lithium-ion battery. The Power Tools plant in Miskolc has produced nearly 7.5 million units over the past ten years to meet the steadily rising demand for the IXO.

The company also opened its new Hungarian headquarters in Budapest last year. The facility is home to 350 associates in sales, administration, and engineering. In total, Bosch intends to invest HUF 30 billion in Budapest by 2015. The location will have a total surface area of 50,000 square meters, which corresponds to roughly six football fields. It will also include an engineering center, which is currently under construction. Following the center’s completion in 2015, some 1000 engineers will be relocated there from the rented offices they currently occupy. The new complex will operate as a major center in the Bosch Group’s global research and development activities. “I am proud that the Engineering Center Budapest has become one of the most important development bases within the Bosch Group,” González said.

Bosch also expanded its existing automotive location in Hatvan in 2013, increasing the total area of the location by 2000 square metres to more than 92,000 square metres. The new office building accommodates purchasing and logistics activities and offers space for 100 employees. The Hatvan plant celebrated several product anniversaries last year – among them the production of the 10th million instrumentation cluster, the 30th million body computer or the 60th million sensor last year and celebrates its 15th anniversary this year.

700 new jobs at Bosch Hungary
“Bosch Hungary’s highly skilled workforce and the internationallyacknowledged competitiveness of Hungarian engineers have driven innovation to create high value-add products and unique technologies invented for life,” said Gonzalez. In 2013, the Bosch Group in Hungary was once again at the forefront of job creation last year: it provided new jobs for nearly 700 additional associates. This brought the headcount to nearly 8,900 (*adjusted previous-year figure: 8,200). Including all nonconsolidated companies, such as the joint venture ZF Lenksysteme, more than 9,600 associates currently work for the Bosch Group in Hungary. At the same time, Bosch has maintained its place among the most desired employers in Hungary for several years. In this year’s Employer Brand Research, a national survey performed by Aon Hewitt human resources consulting company and AIESEC Hungary, Bosch ranked third in a list of most desired companies to work for.

Bosch Group business outlook for 2014
Bosch expects sales to grow by between 3 and 5 percent in 2014. Internetenabled products and internet-based services are one of the focal points of the company's future business. With its hardware know-how and broad technological expertise, the supplier of technology and services is well prepared to move into this direction. “Bosch’s traditional strengths – our innovative strength, high standard of quality, global presence, and the integrative force of our corporate culture – are also valuable in the connected world,” said Dr. Volkmar Denner, the Bosch CEO, at the company’s recent annual press conference in Germany. Moreover, Bosch is global market leader in the area of micromechanical sensors (MEMS) a key technology when it comes to networking things on the internet. Sensors enable a new form of technical assistance in day-to-day life – in automated driving, for example, or the smart home. Bosch’s strategic objective is to create solutions for connected mobility, connected manufacturing, connected energy systems, and connected buildings.

Bosch has been present in Hungary since 1899. After its re-establishment as a regional trading company in 1991, Bosch has grown into one of Hungary’s largest foreign industrial employers. In financial 2013, its 10 Hungarian subsidiaries had a total turnover of HUF 719 billion and sales of the Bosch Group on the Hungarian market – not counting trade among its own companies – was HUF 161 billion The Bosch Group in Hungary employed more than 8 900 people at the beginning of 2014. In addition to its manufacturing, commercial and development business, Bosch has a network of sales and service operations that covers the entire country.