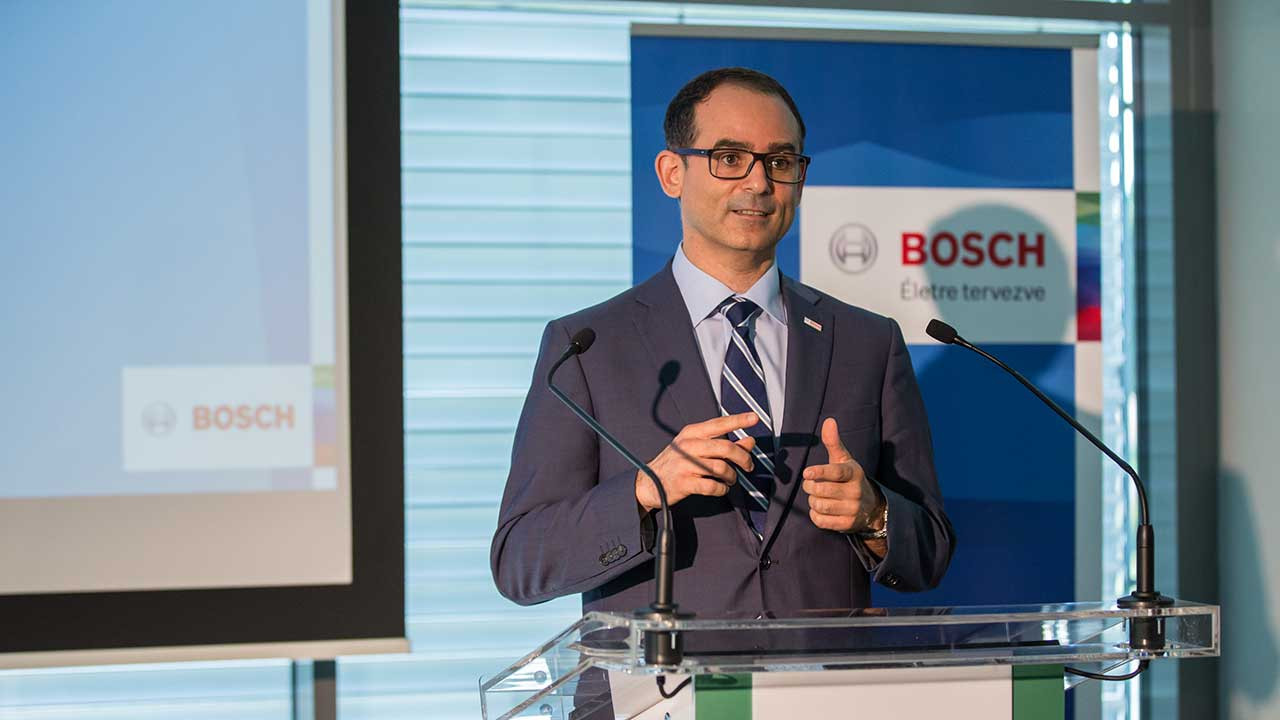 Budapest – Bosch, a leading global supplier of technologies and services, achieved double-digit growth in every area of its Hungarian operations in 2015. Its total net sales in Hungary including sales of non-consolidated companies and internal deliveries to affiliated companies amounted to 959 billion forints, an increase of 16 percent compared to 2014. Sales on the Hungarian market in the same period increased by 23 percent to 246 billion forints on a comparable basis. “2015 was a year of dynamic growth in every respect for the Bosch Group in Hungary. This year we expect our sales to grow further. In the first quarter of 2016, Bosch in Hungary has reached a double digit growth,” said Javier González Pareja, representative of the Bosch Group in Hungary, at the company’s annual press conference in Budapest. “Thanks to our completed investments, we have further improved our market position and expanded the workforce,” González said. 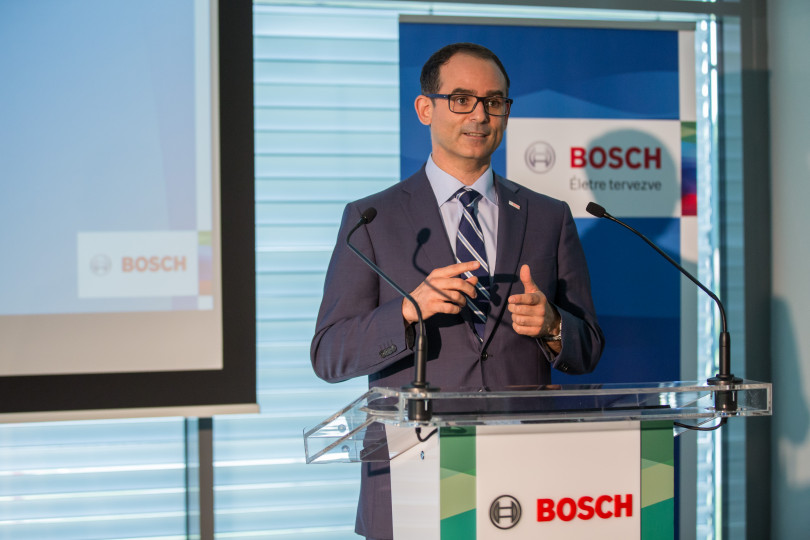 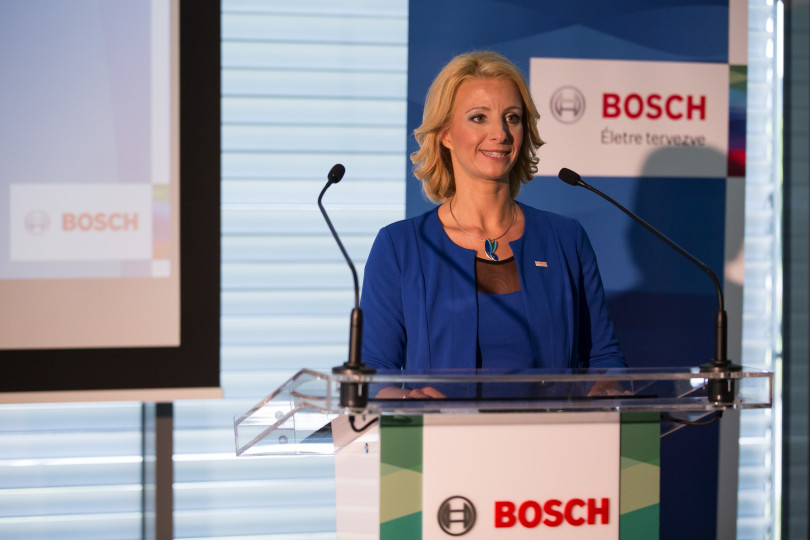 A year of investments – active role in key technologies

As part of its strong commitment to Hungary, Bosch invested in projects worth a total of 64 billion forints in 2015. The autoelectronics plant in Hatvan invested in new production technologies and manufacturing lines for electronic control units and sensors which, among other benefits, provide safety in traffic and increase driving convenience. The Hatvan plant will strengthen its position in the future by supporting the electrification of vehicle powertrains and automated driving.

The company’s other automotive technology factory in Miskolc also contributed to the growth of the Mobility Solutions business sector in Hungary. The plant added several productions lines to its existing manufacturing activities due to high value and cost effectiveness, among them additional lines for eBike drive motors and driver assistance systems.

It is however, not just in the Mobility Solutions sector that the Bosch Group’s Hungarian sites have a prominent role. Several power tools, like the PSR Select cordless screwdriver with a built-in rotatatable bit cylinder, that started life in Hungary went on to worldwide success as well. The dynamic development of the Miskolc power tool plant has paved the way for the launch of new projects in 2015, for example the development of a range of paint sprayers and rechargeable batteries for heavy duty electric tools, backed up with a new specialized measurement laboratory.

Bosch was once again one of the top performers among companies expanding their workforces in Hungary. The company created 1 700 jobs in the country on a comparable basis and brought its total number of associates here to some 12 200 (as of January 1, 2016). “Bosch is steadily increasing its strengths in Hungary, and continues to plan for the long term. Dynamic growth and maintenance of stability both create high-qualified jobs and ensure their permanence,” said González. Jobs requiring a degree-level qualification made up more than 40 percent of the new positions created in 2015, and make up nearly 30 percent of all jobs in the company. More than 1 700 of its associates in Hungary work in R&D. The growth in workforce is continuing in 2016, with Bosch planning to take on several hundred new associates during the year.

Hungary is an important part of Bosch’s global R&D network. In 2015, the company spent 37 billion forints on R&D in the country, 23 percent more than in the year before. The R&D locations in Hungary include two development facilities in Miskolc and the Bosch Group’s second largest European Mobility Solutions development complex, the Engineering Center Budapest. Last year, as well as celebrating its tenth anniversary, the Budapest facility took occupation of a brand new central building. The 1 500 engineers who work there play an important part in forming technical knowledge transfer and industrial megatrends. “The strategic aim of the Bosch Group is to offer solutions for connected mobility, connected industry, smart homes and connected energy systems,” said González. “Innovation and connectivity are engines of growth, and they are already today tangible realities in all of our plants and sites,” González added.

In addition to research and development, the Bosch Group maintains its considerable emphasis on support for training workers and engineers in Hungary. The training center that opened last year in the Hatvan automotive electronics plant with an annual capacity of 56 trainees has made the plant a focus point of automotive electronic training. Since September 2015, the Hatvan plant has also been offering university-level dual training, attended by 7 mechanical engineering students from Szent István University of Gödöllő and 6 logistics management students from Budapest Business School. Hatvan is also the location of the first Community College in Hungary, which opened with the support of Bosch. It provides courses in international management, collaborating with Budapest Business School, and in electrical engineering, with the Budapest University of Technology and Economics. Bosch is thus enabling its associates to continue their studies locally and helping to address the scarcity of engineers on the labour market.

The lean management course which started at Miskolc University in 2014 in collaboration with the Lean Enterprise Institute of Hungary and under the direction of the Bosch Mobility Solutions plant in Miskolc, went into its second year in autumn last year. A training base and workshop for thermotechnology opened at the Bosch headquarters in Budapest in spring. Its highly qualified and experienced staff will train 1 500 people every year on the use and operation of alternative, environmentally safe and energy-efficient heating solutions.

Robert Bosch Kft. has been awarded the honour of “R&D Investor of the Year” for 2015. The City of Hatvan presented the Hatvan plant of Robert Bosch Elektronika Kft. with the “Business of the Year” award for its activities during 2015. The Miskolc Mobility Solutions plant received the “Investor of the Month” award at the beginning of last year and the Miskolc power tool plant received several awards for its quality and lean skills. Javier González Pareja, representative of the Bosch Group in Hungary, was awarded the Knight’s Cross of the Hungarian Order Merit (Civil Division) in honour of his activity in his capacity as corporate executive in strengthening Hungarian-German economic relations and promoting the growth of investment in Hungary.

Following a record year in 2015, the Bosch Group wants to continue its growth trend this year. The leading global supplier of technology and services expects worldwide sales to grow within an exchange rate-adjusted range of 3 to 5 percent in 2016. Speaking at the company’s annual press conference in Germany in April, Bosch CEO Volkmar Denner said: “We plan to grow not only with innovative products, but also with innovative services.” In the connectivity business, Bosch focuses on the “3S’s”: sensors, software, and services. The company is increasingly using connected services to build on its broad basis in the hardware business. As it does so, Bosch benefits not just from its technological diversification, but also from its wide-ranging industry and domain expertise. The newly created Bosch Global Service Solutions division, the recently established Bosch IoT Cloud, as well as the Bosch Smart Home System launched at the start of 2016 contribute to this strategy